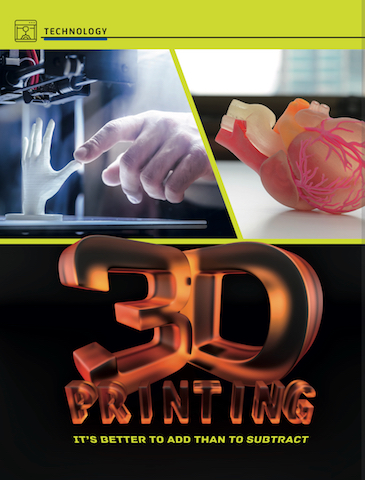 One of the most important differences between a man and an animal is man’s ability to make tools, which help make our lives better. Throughout human history, people have been perfecting the methods of toolmaking. We call this art technology.
The simplest example of such technology is the knife. In ancient times our ancestors made them from stone, chipping away the excess parts from a larger piece.

Sculptors have worked in this way to this day. As the great sculptor, Auguste Rodin said, “I choose a block of marble and chop off whatever I don’t need.”

Then people found ways of getting metal and began using that to make knives. However, the method of manufacturing and the technology remained the same: they took a raw piece of metal, then “chopped off whatever they didn’t need” or as we now say, worked and processed the metal to make a knife or other item. For this purpose different tools were invented: drills, to make holes; lathes, to make surfaces cylindrical, conical, or spherical; and milling machines, to process various flat surfaces.

Such technologies are called subtractive because the desired product comes as a result of chopping off or “subtracting” material from the original piece.

But at best 50%, and in some cases no more than 20–30% of the material ends up being used, meaning that these kinds of technology are rather wasteful.

How to print up a sandwich?

But the most important thing is not that additive technologies help economize on materials. They also make it possible to create a part in great detail. We can make a part with material that varies in thickness or makes latticework structures that cannot be made from either casting or machine processing. We can make, for example, very elaborate cooling systems, which at the same time replace a set of multiple parts with a single piece.

The first 3D printers were intended for manufacturing products from several types of plastic. But today’s machines are able to produce parts from metal and other construction materials, which has substantially expanded their field of application. Examples have already cropped up of these machines printing metal parts for planes, weapons, and bridges, or manufacturing entire houses using construction materials. Of course, each case requires its own special 3D-system.

Thanks to the technology of 3D printing, today we can print complex 3D projection 3D printers allow you to print personal implants and prosthetics.

Two variations of the design of one product. The product on the right weighs 40% less and is offered by the program Within Enhance. It can be manufactured only on a 3D printer.

3D printing enables jewelry designers to create pieces that would be almost impossible to manufacture by hand.

Jewelers also appreciate this new technology. With this new generation of printers, it’s possible to easily create casting molds for the most intricate items. And archaeologists now have the possibility to not only to draw their inferred projection of a discovered item but to actually recreate its exact appearance.

The dream of scientists that may actually come true is the creation of food printers. Such an invention would be able to produce real food from available proteins and carbohydrates and to create human organs, which is especially relevant for people who cannot find donors. Intervertebral discs and stem cells are already being printed today. So, everything that was once considered fantasy and existed only in movies will soon become reality and will make life simpler and easier.

How does it work?

At the first stage of the detail producing an expert draws a 3D template of the object using a special program, which will be printed. Then the program processes the data modeling the layers of the future detail. The third stage is a layerwise forming of the detail in the 3D machine.

There are three types of such machines. In the first stage, the material for the detail pours on the working table as a powder, where it is melted by the ray of a very strong radiation source — the laser and as the result was baked. Such procedure is repeated layer by layer.

The second type of machine uses photopolymers, i.e. materials, which become hard under the laser affected by the light. The third kind of machine uses the materials which stiffen themselves, for example, the cement. The answer is obvious: get a printer for printing houses

But that’s easier said than done. The explosion of interest surrounding 3D printing has not ceased for the past decade and is not limited to the printing of Christmas tree ornaments, human ears, and bones, parts of airplane engines and other trifles. True technology fans dream of printing something large. The approach to printing buildings is very simple: a robot moves along a preprogrammed route, squeezing out a thin layer of concrete or special building mortar. In the time it takes the robot to make a full circle and come back to its starting place, the mortar has dried and is ready for the next layer. To make the drying process quicker, a robot-dryer can follow after the first one.

In this way, the walls of the building will be built up layer by layer.

The Chinese have become world leaders in this. The Chinese company Winsun has already printed a dozen complete buildings. For the “ink,” the 6m-high 3D printer uses scrap building material, bound together by a special hardener. This kind of technology makes it possible to print a building in just a few weeks, at the same time reducing labor expenses by 80% in comparison with traditional building construction, while also cutting down on waste by 60%.

The Arabs have already become interested in this as well, always keen on the latest developments in architecture. In July 2015, they announced their plans to print an office building in the center of Dubai using technology developed by the Chinese.

They plan to print not only the walls of the building but also everything inside, including the furniture.

Europeans are trying to keep up. For several years already, the European Space Agency has been working on developing technology for building bases on the Moon with 3D printing using local lunar soil. However, the date of their lunar base housewarming party has not yet been announced.