Attack Of The Clones 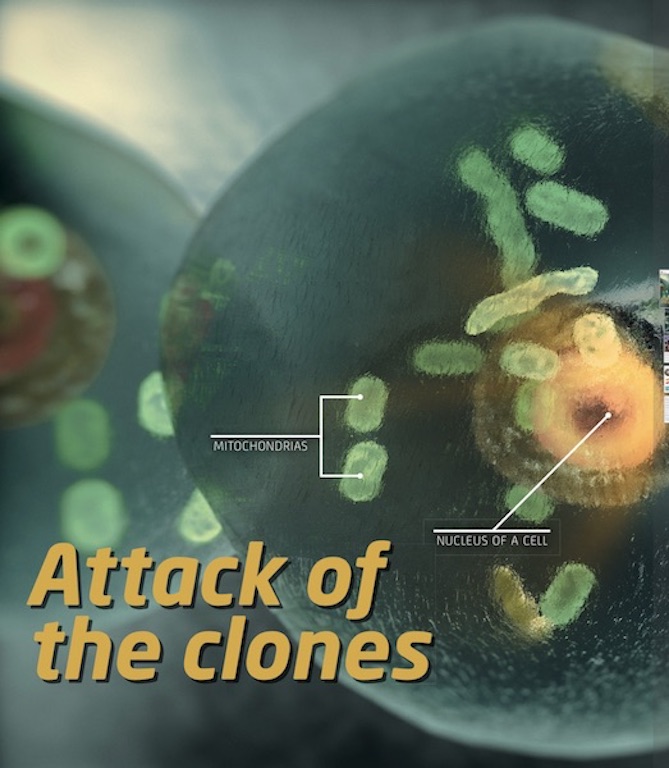 Genes are to blame

As you know, the DNA in a cell nucleus is responsible for the storage, transmission and implementation of hereditary information. DNA contains genes that code different features, such as blue eyes or lactose intolerance. Each gene in the body is represented in two copies — one from mom and one from dad.

?2 when a zygote is formed as a result of fertilization of the maternal egg with the sperm

?3 is a unicellular embryo which divides to bring about a multicellular organism.

At first, all the genes in the zygote work, and then, as it divides, some genes are repressed or turned off. So, in every cell of our body there are genes responsible for the synthesis of gastric juice but, fortunately, they work only in the cells of the stomach. Turning off unnecessary genes, 1 cells acquire their specific functions, such as the ability to carry oxygen or transmit a nerve impulse. In the human body, there are 220 kinds of cells, but they all have the same set of genes because they originated from a single zygote.

This was proved in 1962 by John Gurdon. The scientist took a frog’s egg, destroyed its nucleus and replaced it with the nucleus of the intestinal cell of another frog. As a result, a normal tadpole developed from the modified egg. The experiment proved that the DNA of one cell is enough to recreate the whole organism. The results of John Gurdon marked the beginning of the era of animal cloning, and the scientist was awarded the Nobel Prize in 2012 for his achievements.

The most famous lamb in history was born on July 5, 1996. Dolly was the first warm-blooded animal cloned from the nucleus of an adult body cell. As you remember, in natural conditions the body combines maternal and paternal genes. Our genetic similar- ity with each parent is usually 50 percent, but Dolly was 100 percent identical with the sheep whose nucleus was used.
Dolly’s creators, Ian Wilmut and Keith Campbell, took the nucleus of a sheep’s mammary gland (at that time the sheep was already dead) and placed it in an egg whose nucleus had been removed. The modified egg was carried by a ewe — a surrogate mother. The lamb was named Dolly after the singer Dolly Parton. It should be mentioned that transplanting a nucleus is a traumatic procedure for both the nucleus and the egg. Dolly’s birth was preceded by 277 unsuccessful attempts to obtain a viable embryo.

Despite the fact that Dolly was born healthy and later gave birth to six lambs, when she was seven years old, she contracted a serious viral infection and she was put down. Usually sheep live for about 10 years, so scientists believe that the cause of Dolly’s early death was DNA damage suffered during the cloning process. In addition, Dolly’s age was technically somewhat older. The biological clocks in DNA are fixed: the clone is born as old as its original was when the nucleus was removed.

The experiment with Dolly proved that with the availability of genetic material, it is possible to clone a mammal, even if it is no longer alive. After Dolly, more reports of clones began to appear: mice, pigs, cows, horses... A worldwide genetic boom had begun.Dinosaurs coming home

It was not long ago that the idea of bringing back extinct species through cloning was mere fantasy. But now, after so many animals have been cloned, what is stopping us from bringing back, say, dinosaurs?

Theoretically, this is possible but this requires finding complete DNA from the animal. The problem is that DNA is a fragile molecule. Under the effects of the environment, it breaks up into fragments. Scientists have found out that every 521 years, the amount of DNA is reduced by half and the last DNA molecules disappear from bone tissue after about 6.8 million years. But dinosaurs died out 65 million years ago!

But don’t despair. Maybe we can’t bring back dinosaurs yet, but we can try to bring back animals that died out not so long ago. Scientists are seriously discussing the possibility of bringing back woolly mammoths, dodo birds, passenger pigeons and other animals that seemed to be gone for good.

Cloning can also help save endangered species. Biologists from New Orleans were the first in the world to obtain healthy offspring from a pair of unrelated cloned animals, in this case African wildcats. It turns out that clones are capable of natural reproduction!

All over the world, banks are being made to store the DNA of endangered species. Scientists hope to use them to restore endangered animal populations. Will they succeed? Time will tell.

A person is more than a set of genes. You yourself know how people who grew up in one family may be different from one another — think of your own brothers and sisters. A person’s environment — their school, hobbies, friends — also makes a significant contribution. A person’s clone will be just a genetic duplicate of the original. Even natural clones, identical twins, are not exact copies of each other. They have different moles and palm lines, and there are slight differences in their facial features. When the experiment with Dolly showed that a de- ceased organism can be cloned, there were people who wanted to clone their departed relatives and heroes of the past. A second Einstein, for example, would contribute a lot to modern science! But a clone will not be a perfect replica of their original. They will be a new person, with their own character and destiny because they will fall into another environment and participate in other events. They will not know anything that the original knew. You can make a clone of Einstein, but how can you make him a real “Einstein”? That is the question.

Views on cloning are mixed. On the one hand, we can use it to help save endangered animals, create organs and tissues for transplantation and enable childless couples to become parents. On the other hand, cloning presents a lot of difficult questions: can we change nature? When do we go too far? What will be the consequences of our actions? What makes us human? There are no clear answers yet